"Our capabilities for your best service"

Our clients face the enormous challenge of training the personnel in charge of this type of facility and this is where INEXA offers its Operation and Maintenance services to respond to this need. INEXA has developed an efficient work methodology that results in a significant reduction in costs for the client. We offer our O & M services as a technical assistance where the client contributes its personnel and capacity to purchase consumables and spare parts, under the supervision of our engineers

INEXA can integrate all the information and document management existing in its management system and we are currently developing a remote access work application. Likewise INEXA works with the SCADA systems of the client and remote accesses are configured for a 24-hour supervision from our technical office in Spain if the client requires it.

The methodology developed allows the effective execution of the different maintenance tasks through easy-to-understand procedures, illustrated graphically (see example) and simplified so that the qualification of the personnel involved is very basic. We break down the type of tasks and jobs by qualification levels and determine which jobs should be subcontracted in specialized local workshops. All this process is done in a personalized way for each client. In short, we try to minimize the total fixed costs in the operation of the plant, both in new facilities and in existing plants that want to reduce their current cost of OyM.

INEXA is one of the few companies in the water sector that offers specialized energy audits in sea water reverse osmosis desalination plants. Furthermore, INEXA applies similar methodology in the study of water pumping stations.

The percentage of energy expense is very significant in most of the water utilities companies, either in the private or public sector. Nowadays these companies face important challenges in terms of energy savings and efficiency to decrease their operating costs. The energy audits offered by INEXA allow our clients to identify the part of the process or any piece of equipment with low efficiencies ratios and therefore planning the necessary measures and strategies for energy and cost savings.

INEXA offers a whole service of technical assistance and consulting for the implementation of the norm EN ISO 50001:2011 relative to Energy Management Systems. The companies certified with an Energy Management System add a very important value to their activity optimizing the use of energy, considering the use also of renewable energy. This standard can be implemented in any kind of entity either public or private, regardless its activity and volume of sales.

INEXA brings about an important related port-folio for this type of implementations, specialized in the water and waste water treatment and desalination activities. It should be noted that this sector is very specialized and most of the time general auditing companies do not offer such specialized services.

Particularly in water pump station we apply the latest technology for the efficiency measurement such as the thermodynamic method as per the standard ISO 5198. With this technology we are able to maximize the accuracy of the data taken in the field. Thus the accuracy of the economic and feasibility of the new capital investments are also guaranteed.

For the specific studies for pumping stations, we have created the services named as “ECOBOMBA”. Now days we have studied pumping stations up to 800 kW. As well as we have applied successfully this technology for the efficiency measurement in high pressure pumps in sea water desalination plants.

The client can choose for various types of ECOBOMBA services, namely:

The client contracts a complete energy audit. After this study, the client will have every data needed and even a financial feasibility study for the necessary investments corresponding to an improvement in energy efficiency.

The client only hires INEXA for the measurement of the pump efficiency using the thermodynamic method. INEXA then propose an Energy Savings Performance Contract (ESPC) to the client to materialize the measures in the improvement of the energy efficiency. In the contract period INEXA shares with the client the savings obtained. INEXA only assumes the technical risk in this case, the client is responsible for the financing of the needed investment.

In this type of service INEXA does not perform any measurement or data acquisition beforehand and only performs a preliminary analysis based on the available data procured by the client. The client shares the savings also with INEXA but lesser amount that in the previous type of service. In this cases, INEXA can offer the financing of the investment and also assumes the technical risk of it.

INEXA assists other engineering companies to prepare tender and bid documents either for national or international projects.

INEXA can furnished the needed task to define a Project from scratch doing the preliminary engineering that allow potential clients to decide the feasibility of an investment Project. This service can be completed with a full OPEX cost analysis.

Since 2011, INEXA has focused strongly in its design capabilities, investing in BIM type design tools; allowing us the complete definition and 3D modelling of any type of plant or installation.

The technology used by INEXA saves engineering and installation costs; raising the productivity of the Project when changes have to be introduced in the installation, assembly and commissioning phases of any Project. As well as, the final drafting of “as built” and technical specifications data is done relatively simple and fast.

Our specialized work team can supervise the fabrication and assembly works of different packages in a single Project, avoiding conflicts and clashes and decreasing considerably the assembly time, minimizing the errors and stoppages. Furthermore, we are in a position to transfer partially the know-how to key contractors that are willing to cooperate with INEXA in a long term basis.

INEXA is flexible in terms of the scope of the required services and packages of engineering to be supplied to the client; being able to cooperate with other engineering firms or partners. INEXA applies the best international standards and practices of engineering in its design and engineering services. 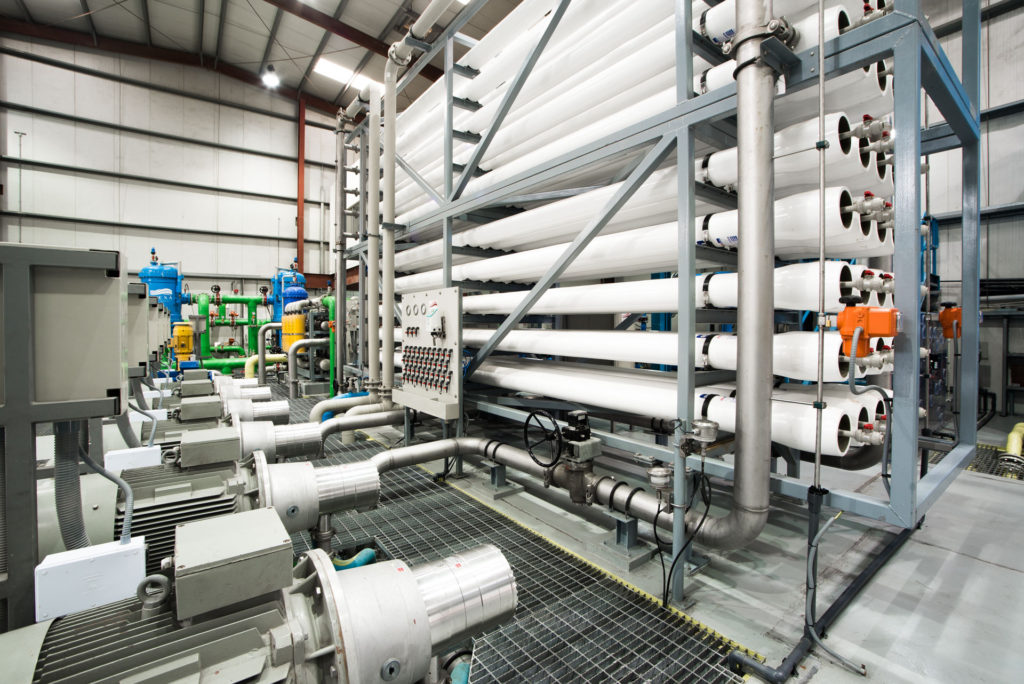 In the last years, we have grown organically, executing turn-key projects internationally, being able to perform every phase of a Project:

We would like to emphasise our commitment to our quality programme and procedures, allowing the client the following up of each phase of the Project, from workshop fabrication up to plant commissioning. INEXA holds the experience in furnishing the specific Inspection Points Programme for each piece of equipment, specialized in the water treatment and desalination field.

We have also provided modular plants for the touristic sector in the Canary Islands as well as water treatment plants coupled to renewable energies, stressing the Project done in the south of Morocco with the suppor to UE funding.

At present, most of the new seawater desalination plants use reverse osmosis technology. In these installations, one of the usual drawbacks is the contamination of the reverse osmosis membranes, due to the effect of possible contaminants in the feed water, suspended particles, colloids and bacterial life, despite the pretreatment to which the raw water is passed through.

In order to minimize the costs of pretreatment in small-scale plants (<500 m3 / d), INEXA has developed a system for the seawater intake that minimizes this problem. The system takes advantage of the natural filtration capacity of the land and uses draining belts that work by capillarity. Basically the solids in suspension are not forced by this physical phenomenon in such a way that the water flows through said belts and in turn prevents the system from clogging. Please see the video for more details. It is understood that our system “aligns” the gaps or interstices of the land where the water only travels by the capillary phenomenon thus avoiding the clogging with solids. However, the most outstanding thing that we can offer as an improvement is that our system limits the bacteriological levels in the sea water intake quite a lot; since the water is taken outside the penetration zone of the solar radiation as it is a buried system. Biological fouling is considered the “Achilles heel” of membrane processes.

In this way, electrokinetic reactions and hydrophobic interactions act by means of the bacteria approaching the membranes and in this way the adhesion between the microorganisms and the membranes takes place. Reverse osmosis membranes are colonized by a wide variety of bacteria, including Mycobacterium sp., Flavobacterium sp., Pseudomonas sp. and another series of organisms. The formation of the biofilm begins with microorganisms capable of using organic matter from the feed water and in this way grow, reproduce and synthesize extracellular compounds. The matrix of the biofilm contains polysaccharides, proteins, lipids and perhaps DNA, and can absorb both organic and inorganic molecules acting as a nucleus for the formation of inorganic crystals. These factors accelerate crystalline fouling and biological fouling is more difficult to eliminate.This type of biological fouling affects to a greater extent small-scale desalination plants where customers or end users are not aware of this type of problem and do not have access to knowledge to solve them. Therefore, once biological fouling is uncontrolled, it produces almost irreversible losses in the production capacity of the plant and the absence of solutions prevents a successful operation of the same. With our DRENACAP system, INEXA has developed an effective solution to this problem by minimizing operating costs for small-scale seawater desalination plants and those located in remote areas.