In response to the growing awareness of the energy costs borne by companies, In 2013 the company awarded the Ondeo-Degremont company, by the Government of the Canary Islands, for the construction of the new frames No. 3 and No. 4 with a nominal capacity Of 7,000 m3 / d each. This project has included, among others, improvements in civil works in the same building where the oldest frames were installed, corresponding to the sanitation of the metal structure and the enclosure with prefabricated plates of reinforced concrete. These two new frames already incorporate the technology of energy recovery by isobaric chambers that is intended to provide the other two racks. The reform of the EDAM of Puerto del Rosario IV will be carried out in two phases, being the object of this project the measurement of the yields in the equipment of pumping, corresponding to the reform of the frame # 2 constructed in the year 2000 to obtain an efficiency improvement Substantial energy in accordance with what was committed by the Ministry of Economy and Finance of the Canary Islands Government for the granting of ERDF funds to finance the project.

In the service for the improvement of energy efficiency in pumping equipment we identified the following specific objectives:

Measurement of the current operating parameters.

Analysis of operation of the equipment in operation.

In this case, the equipment to be measured would be high pressure pumping equipment including booster pumping, for the certification of the performance of these equipment by the ISO 5198: 2000 thermodynamic method. 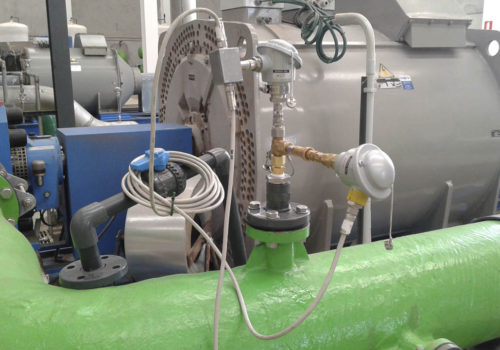